Heaven As Nothing but Distance
Maybe it was enough to believe
the Zodiac’s blazing entirety
would be cast from the sky,
an effortless handful of salt

scattered to the Kansas plains’
red wheat. Out West,
souls every day were shedding
their Earthly inheritance—the refused

histories of cause and effect,
blight, hunger with a trace
of Santa Fe Railway coal
dusting grocers’ displays—

and so my grandfather, too,
who, having left Topeka
for Los Angeles’s early sprawl,
exits the train station’s dim

into day’s white flash,
takes one step onto his upturned
apple crate, a new Bible
in his palm, and he begins

to explain why all things are fire,
what it is that makes you ache
awake, and why this must
be so. Once, on a gritty

first eyeball, then swoop,
then peck, almost in unison,
something tangled in a blue tarp
washed-in above the tide-pull.

A drowning victim, maybe.
A vagrant. And though unable
to see what was there, when he
put his hand in mine

I could not have even counted
all the things I wished
to believe in, and which would still
be true if what I remembered

was the sound of the waves landing,
but now there is only the lungless
hot breath of L.A.
on my cheek, the cries of gulls,

their wings ruffling into flight.
The night after his memorial,
someone dug a hole into
Kansas silt loam, dropped

into it the plastic baggie
with his ashen remains.
Nothing then but distance in every
direction. Above us, a satellite’s

beacon begged the horizon
for home, the heavens’ scales
measured the darkness, and that’s all.

Joshua Robbins is a PhD candidate in English at the University of Tennessee where he teaches poetry and fiction writing, and serves as Editor for Grist: The Journal for Writers. His awards include the James Wright Poetry Award, the New South Prize, as well as multiple Pushcart Prize nominations. His work appears in Best New Poets, Mid-American Review, Third Coast, Hayden’s Ferry Review, Verse Daily, Copper Nickel, Southern Poetry Review, and elsewhere. 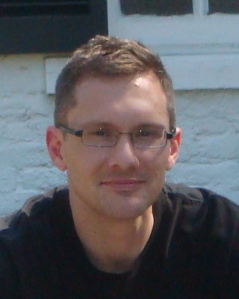