The Hawaiian bobtail squid
forages in the night surf
while waves of moonlight, of starlight
fall like sediment into the sea.

Smaller than my thumb,
it is a galaxy, an organ
of light inhabited by millions
of luminescent bacteria.

In the abyss beneath these squid
other nocturnal predators prowl;
yet they can not see the bobtails
whose bacteria protect them, shining
in the wavelength of the stars
and of the moon.

What have we learned
to do for the Earth
that means as much?

Antarctica
On this continent time is a whiteout
waxing and waning with the ice
that doubles in each six month night.

Snow of a million years,
snow falling upon snow
fills the valleys,
caps the mountains.

Empty as the moon,
silent as the wind,
this is a land of hostile cliffs,
a white abyss where coastlines host
the only life there is.

Yet here we set up bases,
flag the Pole, abandon garbage
which will not decay–here,
where the Earth archives dust,
and holds our ancient air
in bubbles under ice.

and seals feed on krill
which feed on plankton
which may die from too much
ultraviolet light.

I think of an astronaut
walking in space, the umbilical
connecting him to the mother ship
all that he has.
And then the disconnect.

Whales dive into frigid waters,
float far beneath the swells,
their great hearts fueling
the heat of their flesh
as they drift among
luminous bottom fish.

In the dark night of the oceans;
in the millions of years before
we were there to hear them,
whale songs lit the Earth
with echoes, arced between
the stars.

When whalers rip their bellies
and drag their gutted bodies
through cold seas,
whales are caves hoarding sun,
for even after death
the heat of their decay
seethes in their bones.

[All from Lizard Light: Poems From the Earth.]

STATEMENT
In the “Preface” to my book Lizard Light: Poems from the Earth (Sherman Asher Publishing, 1998), the collection in which these poems appear, I say,” I am consistently aware that we are on a planet, and that it is alive. It is time to write poems that go beyond the personal, poems that speak for the Earth and its inhabitants in a time of great vulnerability for all species, and for the planet, itself. We need poems that speak of universal concerns and point out that all beings exist as integral and inter-connected parts of the larger community of the universe, poems that affirm. I hope that the poems in Lizard Light confirm our mutual responsibility to the Earth.” I wrote that in 1997, thirteen years ago, and I believe it is even more true today.

My first published chapbook (1975) was titled House by the Sea, and its long title poem captures my childhood memories of summers spent at the old, brown-shingled cottage on stilts at Barnegat Light, Long Beach Island, New Jersey. The cottage belonged to my Great Aunt and Uncle, and my mother spent her childhood summers there as well. I have always been a child of the ocean, even during the eleven wonderful years my late husband and I lived in Santa Fe, NM, before returning to New Jersey in 2002. One of my favorite childhood books was The Sea Fairies by L. Frank Baum. I was Trot, the little girl who visited the undersea kingdom. We carry the ocean within us, and ultimately return to it. The final two stanzas of my poem “Returning” in Lizard Light combine my love of the Sangre de Cristo Mountains in New Mexico and the Atlantic Ocean: On the horizon / mountains wait for our hearts / to join the others beating slowly / inside stone, // and when deer come down / to the shimmer of salt, / they will taste our senses / returning to the sea.
And now, prophetically, considering the title of my first book, I find myself living in the South Jersey shore area, having moved here soon after my husband’s death in 2008. Since my move, the ocean has been both comfort and companion, and its rhythms accompany my healing journey as they wash through a number of my grieving poems in Recycling Starlight.
~~~~~~~~~~~~~~~~~~~~ 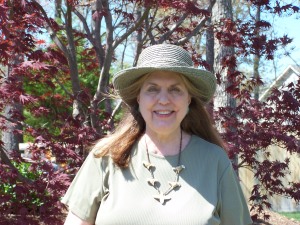 Penny Harter’s new chapbook, Recycling Starlight, will be out in September from Mountains and Rivers Press. Her many other books include The Night Marsh (2008), Along River Road (2005), Buried in the Sky (2002), Lizard Light: Poems from the Earth (1998), and Turtle Blessing (1996). With her late husband, William J. Higginson, she co-authored The Haiku Handbook (25th Anniversary Edition, 2010), and her children’s illustrated alphabestiary, The Beastie Book, came out in December, 2009. Her recent work appears in many print and on-line publications, including the journals Tiferet, Umbrella, and Valparaiso Poetry Review, and the anthologies Finding the Way Home: Poems of Awakening and Transformation; Come Together, Imagine Peace; Beloved on the Earth:150 Poems of Grief and Gratitude; Beyond Forgetting: Poetry and Prose about Alzheimer’s Disease; Sisters of the Earth, Second Edition; Not a Muse: A World Poetry Anthology; and Haiku Mind:108 Poems to cultivate Awareness & Open Your Heart. A Dodge poet, Harter will be reading at the 2010 Geraldine R. Dodge Poetry Festival. She has received three poetry fellowships from the New Jersey State Council on the Arts, the Mary Carolyn Davies Award from the Poetry Society of America, the William O. Douglas Nature Writing Award for poems in American Nature Writing, 2002, and a fellowship from Virginia Center for the Creative Arts (VCCA) for a residency during January, 2011. She lives in the Southern New Jersey shore area and works as a poet-in-the-schools. For more information, please visit her web site: http://www.2hweb.net/penhart; and blog: http://penhart.wordpress.com.