It is an armband around the Gulf Coast,
a quiet black ribbon on the dark sea
wrapping the waters in grief,
smothering the ocean’s secret mouth.

From a black ribbon on the dark sea
dolphins uncoil from the convulsing waves
that smother the ocean’s secret mouth,
slicked brown by something crude.

Dolphins writhe and convulse in waves
as limp bodies emerge from billowing shadows
slicked brown by something crude,
punch drunk from lack of oxygen and food.

When those limp bodies emerge from shadow
we know the sea is unforgiving. Watch as pelicans
punch drunk from lack of food
wash ashore on fine white beaches.

We know the sea is flammable.
Tar balls, sticky black jellyfish,
leave an oily signature on fine white beaches
while sea turtles burn in the currents.

The spill zone drifts toward the coastline.
As the Earth spits the oil back
an ecosystem faces extinction.
Smother the ocean’s secret mouth.

Like an armband around the Gulf Coast,
a quiet black ribbon floats on the dark sea.

I tell my son
that the best poems
are written in the sand
and washed away with the tide.
I say, the moon controls the waves,
uses the wind to rake the shore.
It is an open invitation to fill
the world with words
because like seashells
you can never have too many.
I tell him to wade into the water.
Start a conversation with
the tiniest grain on the beach,
the one that catches his eye with its glint.
It will tell him everything he needs to know
about this moment, about how to stay in it
a little longer. It will tell him how to be,
for an instant, the thing he most wants
to become.

–“A Mother’s Tale” is posted on the Greater Brockton MA Society for Poetry and the Arts’ (GBSPA) website (click here).

Like so many of us, I was affected by the hi-def footage of oil gushing into the Gulf of Mexico. I have lived by the ocean all my life, yet I can only imagine the ecological and socioeconomic damage that’s happening every second because of BP’s greed and carelessness. Writing “The Spill” as a pantoum seemed a natural fit between form and subject. There’s something about the repetition of the lines mirroring the rocking motion of water that works, I think, as well as giving a sense of urgency to the catastrophe. 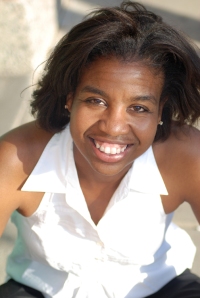 January Gill O’Neil is the author of Underlife (CavanKerry Press 2009).  She is a senior writer/editor at Babson College and lives with her two children in Beverly, MA. She blogs at Poet Mom (http://poetmom.blogspot.com).