SIX AQUATIC GODDESSES OFFER THEIR NOTES ON THE NEW CENTURY

When she crosses the dunes, she leaves holes instead of footprints. Standing hip deep in the Gulf, her thin limbs don’t disturb the waves. She is young and her gut is strong but the gulls die around her with a flap of black feather.

She has gone fishing again and in this tide she struggles, thin legs wrapped up in that thick wet pelt of bladderwrack. Petrol. Whole belts of it broken loose: the sloughedoff spongy muck of a uterus at new moon. The vesicle cysts close by, for buoyancy, for surfacing. What a tangle, what a mess of trumpets and vines and the kind of crying that accompanies a split of sinew and tissue: saline, and crude.

Death, birth, what of it? The insides have come out. Our world a punctured womb that contracts and expands without ease. What is close comes near, and then billows away far from reach. So much is evacuated, and then all is spasm, and gashes, and wet tissue.

Where there is pain, there is a gasp. Our ribcage a cleaved accordion that now screams weakly. The organ no longer used for lovemaking. The air we expel is stale with fear.

Please don’t walk upon this sand.

Pray to be turned into a blanket, a hat, a pair of socks: anything that comforts. Pray for what now gives way, that it some day hold. Pray that the dunes will stay around the roots. Prayers for birds that swim instead of sink are prayers for a grandmother stitch of doilies and faded daisies. Beauty woven through disaster. Pull each thread of it tight and nick it with the teeth. Just a snip of the lips so it’s white and wet.

Pray for good winds. Pray for calm seas. For our immortality. As often as possible, pray for something that does not exist.

Give promises that predict a new kind of orifice, something that opens and closes in a part of the body that is currently undiscovered, through which something good emerges. Underneath the flap of skin – let’s call it a tear, where inside something’s flickering. A rip in the epidermis: embroider the membrane. Decorate the opening like an about to be bride.

A body mollusk – as though there are pearls waiting inside us. As though our poverty of spirit is only passing.

The mouth is a pocket of wind and wanting, and also of words. It smells of a mother licking its young. One tongue or two, accommodating. Just a flip of muscle, a flap of skin there we call a cheek, the sag that goes taut with shrieking.

In the summers, the shrimp slept with us in curls, fresh as ferns. They were as much among us then as men whose hands were for creation. The gulls slept safely near our eaves.

She has not returned from fishing.

There were moments of still, once, where the tide pulsed within its bounds of vein or dune. The trees grow roots to embrace the buried. 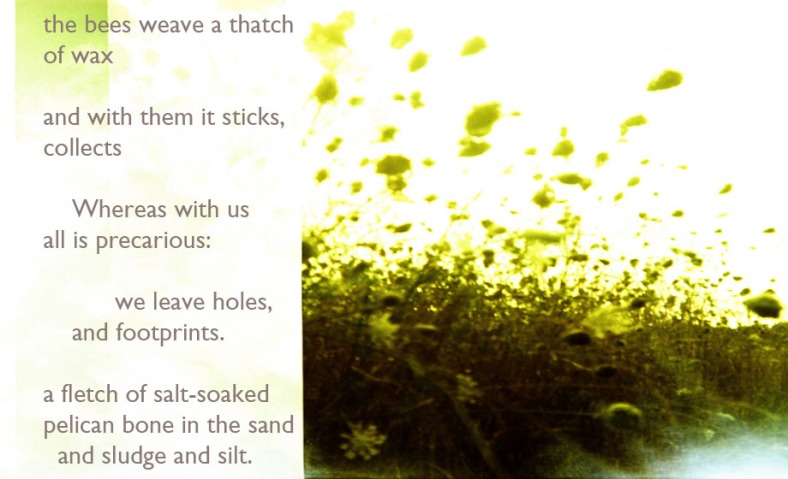 The bees weave a thatch of wax, and with them it sticks, collects. Whereas with us, all is precarious: we leave holes, and footprints. A fletch of salt‐soaked pelican bone in the sand and sludge and silt.

Like the men who sailed off the edges of this sea and fell into the void, there are areas within us that contain a precipice.

Start collecting sticks and cloth. Learn how to wrap them for a shroud or parachute. 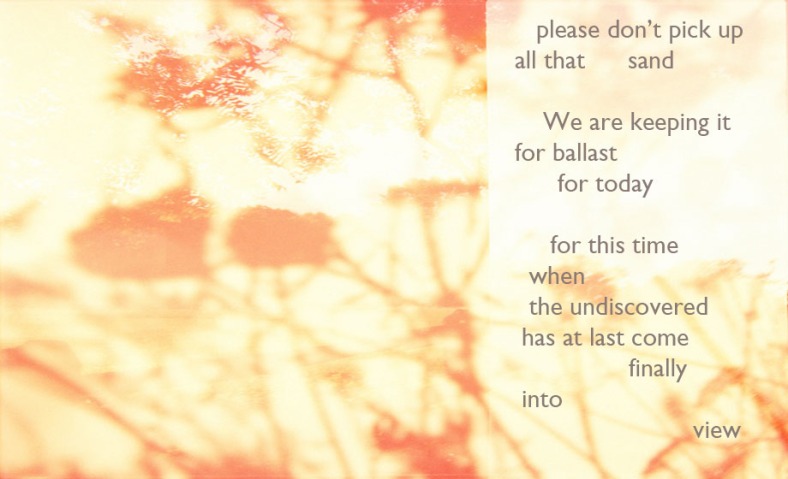 Please don’t pick up all that sand. We are keeping it for ballast, for today, for this time when the undiscovered has at last come finally into view.

Of Lithuanian descent, I was raised in the Southern United States and along the border with Mexico – these poems are located in the waters of my places of origin. The three poem titles in this series are the names of goddesses who were once worshiped as the rulers and protectors of the Baltic Sea, and the Aztec and Mayan goddesses who were once worshiped for their power over what is now called the Gulf of Mexico.

I think of this poem sequence as a conversation between these women, discussing what has happened in their realm. Today, the Yaroslavl-Kirishi Russian oil pipeline threatens the complex ecosystem of the Baltic Sea, especially the bird sanctuary on the Beryozovye Islands.  And the long memories watch on along the ancient eastern coast of Mexico. 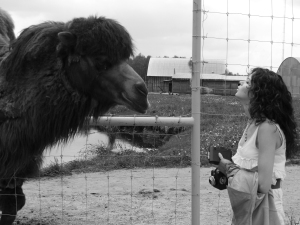 Quintan Ana Wikswo works at the intersections of text and visual art. Her work appears regularly in magazines, museums, galleries, and performance spaces throughout Europe and the United States. The recipient of grants and fellowships from the NEA and the NEH, she is currently artist-in-residence at Oberpfalzer Kunstlerhaus in Germany, and at the Lynchburg Old City Cemetery in Virginia, one of the nation’s oldest African-American public cemeteries. She has worked in the field of human rights since 1989 as an artist, activist, and organizer. Her studio is located in Los Angeles. www.quintanwikswo.com

A regular contributor to Conjunctions and Denver Quarterly, Wikswo’s work has appeared or is forthcoming in Kenyon Review, Tin House, Drunken Boat, Alaska Quarterly Review, New American Writing, Trickhouse, DIAGRAM and many others. In 2010, Catalysis Projects released a DVD collection of her video-poetics installations: Waterland and Catastrophe Apostrophe along with a companion artist’s book of photographs and prose poems:Schwarzer Tod and the Useless Eaters.  This work will show at the Musee des Moulages in Lyon, France in the autumn of 2010.