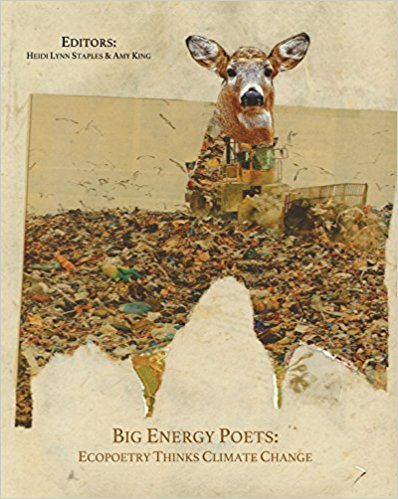 Contributors include: Stephen Collis, CAConrad, Matthew Cooperman & Aby Kaupang, Adam Dickinson, Suzi F. Garcia, Brenda Hillman, Brenda Iijima, Anna Lena Phillips Bell, Lucas de Lima, Eric Magrane, Joyelle McSweeney, Julie Patton, Craig Santos Perez, Evelyn Reilly, Linda Russo, Metta Sáma, Kaia Sand, Kate Schapira, Jonathan Skinner, Cecilia Vicuña
“If we can utilize these poets to help us break the mold of hierarchical thinking, of imperialistic impulses and approaches, and if we can move past the distractions of who will be in power next and let these poets help us see and interrogate the structures that support the continued denigration of the planet and people who are dubbed “expendable”, the effects of which can be seen in places like Syria and India, then we just might have a chance at possibly impeding the increasing scarcity of resources and destruction for pleasure and profit. With these voices and ideas, we might also upset the routines and beliefs that sustain structures committed to harm.” —Amy King, ed. Big Energy Poets
“Join the movement–the transfer of energy from a human body onto the page and into the reader—the power of invisible connective collective corporealities suggested in this collection’s title Big Energy Poets. Read the singular work collected here by some of the most profoundly ambitious poets alive. Swarm with them in their perceptual challenges. Thrum in the wisdom of their suggested readings. Dance in your beings as the ground moves beneath our feet.” —Heidi Lynn Staples, ed. Big Energy Poets
Big Energy Poets reads as if it were forced into its structure by the weight of the Earth itself. It gives the reader not only powerful, moving poems, but the theory and practice behind them; it responds to the crisis it contemplates—a crisis that threatens existence—by taking responsibility for its own existence. But this response seems born of another recognition as well: there is no position beyond Earth from which the poet can observe and write. The crisis before us cannot adequately be addressed by poets singing in the empyrean, but maybe humans, working together, and singing together, can do so. Big Energy Poets makes human.

—Shane McCrae
A song of mourning and fury, the Big Energy Poets anthology is an invitation to change the self—and the world—through embodied practice. Amidst ecological catastrophe, listen to the recordings of recently extinct animals while walking through Wal-mart; learn charms for hemlocks to ward off harm; discover the unfamiliar in the familiar in order to re-see; apologize to celery and strawberries. The body of the poem meets here the body of the world: poems mirror the toxic deposits of chemicals in the human blood stream; make dams to release energy from their jagged lines and slashes; turn transcribed blackbird song into lyrics. Converging science and art; ethics, aesthetics, and politics, BOP reminds us that ecopoetics is equal parts what CA Conrad calls a “vibrational absence” and the thrum of the all-that-still-is awakening us into new forms of attention.

—Nomi Stone
Anthologies are bouquets of flowers–by definition and by destiny, they wilt down soon then rejoin the dirt. Somewhere, on the lowest shelf, at every used bookstore, they invite the lower back, in the age’s old weed-picking pose, to burn or to bust. Big Energy Poets, however, is one to keep us limber; one to stay. Its principle richness is its variety: we see the poets from so many angles as to know them in ways both intimate and inspiring. Enduring and fierce and true, this book is beacon, ballast, and catalyzing kick. For every poet who has wondered, what good is a word in times of trauma, this anthology is for you. Bouquet of flowers? No. Staples and King have welded together the witness and the warrior into one powerful cudgel here. Here is a guidebook for our rankling and hopeless times: a stay and a heartening and a way through understanding toward courage and action.

—Abraham Smith
Big Energy Poets: Ecopoetry Thinks Climate Change, is more than another book on climate change, these disparate authors are collectively voices in the same struggle: How to ensure the planet’s survival, where planet and body (human or otherwise) are not separate but synonymous, are inextricably tied. There is a necessary insistence in this anthology on the body politic being the earth’s politic. Together, this is a creative treatise toward the integrity of continuance, and against fear of the other, the “other” being as much ‘nature’ as person. The Introduction asks, “Why poetry?” to confront the urgency of climate change and all of its implications and causalities. The answer is found in the challenge taken up by these poets as they allow us access to both their poetry and their process. Here authors utilize their critical and creative practices to forward a conversation we can simply not afford to ignore. Race, gender, genocide, these poets are asking questions and further, daring to question themselves. It may surprise some how many of the poets feel the poem as inhabiting the body and it becomes easier through that understanding to see how the poet, the body of the poet, connects to the land, to the environments in which they find themselves. Indeed, several of these poets even as they put words to the page in all manner of formats and styles, literally put their bodies on the line that marks the difference between apathy and action by marching, picketing and refusing to stop creating or privileging the power of the imagination to alter our course. Read this, powerful, instructional and inspiring, it does what we want poetry to do, move us. The writing of poetry can make one adept at discerning systems, correlations, and interconnections. Ecopoetry is the nexus of science, activism and poetics. From Anna Lena Phillips Bell’s intimate litanies of trees that bring to mind the names of children in a class ledger, to Lucas de Lima’s take on transmogrification, to Meta Sama’s evocative conflations of “hair,” “river” and “sand,” here we find the polemics of universal intersectionality, a necessary embracement, where we all have something at stake and at risk. As Brenda Hillman writes in her essay, “A Brutal Encounter Recollected in Tranquility” Writing may be your most necessary action but you can’t be the only one.