It’s Black Friday,
and we’re miles from any mall, where
Capitalism

will trample whoever opens doors
at the Wal-Mart
at six in the morning. Evening, waves

tumble ashore to
the echo of Thanksgiving,
tossing billions of dead

bivalves over the island sand.
Promised rains never came and,
as night falls—unfolds its Orion,

the Oberoi, blood on the stairs and
searching room to room,
but not our room, where the only red

is your skin echoing
the rumble of a sauna tub
and, lying with door open,

your warm mouth echoes the pounding
of the Gulf.

RECENT ACTIONS
I had this idea to do a collaborative protest/civil-disobedience project (in the form of a chapbook) to send to Gulf-state politicians. Originally, it was going to be just a couple of us but, as it started to take shape, Jay (Snodgrass) and I invited others to participate. The resulting collection is really stunning and a nice cross-section of poetic voices.

The final work is called Conquistadors of the Imagination and includes poetry by Denise Duhamel, Michael Rothenberg, Sharon Mesmer, Elisabeth Workman, Christine Poreba, and more. After the initial copies go out to our “target” audience, we’ll make some available for sale, with proceeds going to Save Our Shores. 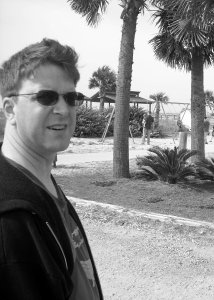 Scott Sweeney is the editor/publisher of Grey Book Press, producing chapbooks and journals (most recently Momoware). He has published poetry in a number of small press journals and independent webzines. Scott lives in Tallahassee, Florida, with his wife and daughter and two Siamese cats. While he doesn’t really enjoy the beach, he has a profound appreciation for nature and the sanctity of our Gulf Coast ecosystem.