SCIENCE FICTION
Just now I touched my chest
And felt my heart quivering there.
This must be one of the bad times.
I think it is quivering with remorse
And exhaustion. Once I saw a heart
Beating in a documentary. I was a very
Little girl and the sight disgusted me.
Throbbing and not stopping my heart betrays
Me and yet remains sure and true, a thing
Of nature. The Earth bleeding
Its guts out on the sea floor also exhausts
Me with remorse and shame, and yet I have to trust it
As wealth is proven by how terribly it devastates
Itself, and I am but one symptom among billions of the wealth
Of Earth. A tired feeling that is recuperated by a passing spaceship
Or an infinitude like fame but more universal. I will have to miss you
Earth; I miss you already. And yet when I touch myself whom I should
Not trust it is still only the heaviest and most jealous feelings that bind me to you, like blood. 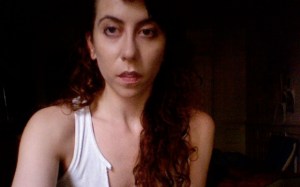 Ariana Reines is the author of The Cow (Alberta Prize, FenceBooks 2006) and Coeur de Lion (Mal-O-Mar 2007) and the translator of My Heart Laid Bare by Charles Baudelaire, for Mal-O-Mar, and The Little Black Book of Grisélidis Réal: Days and Nights of an Anarchist Whore

by Jean-Luc Hennig, for Semiotext(e). TELEPHONE, her first play, was produced by The Foundry Theatre and presented at The Cherry Lane Theatre in New York, February 2009. The production won two Obies. TELEPHONE will be published in Fall 2009 in PLAY: A Journal of Plays.