I pick up the knife and begin to chop, the same
knife that almost sliced off the tip of my finger
last night as I prepared soup. Another day
is another day. An oil well’s gushing non-stop
in the Gulf and the Drill, Baby, Drill gal sends
her prayers. A fishing boat captain working
on cleanup was found today in the wheelhouse,
shot in the head, no note left for his wife.
An Ayatollah in Iran blames earthquakes
on immodestly dressed women.
When I think
of the myriad ways there are to hurt a woman, I chop
the avocado so small it liquifies. No matter what,
you have to pick up the knife and begin again.
The oil spill washes into pelicans’ nests, smothering
their young. I know some people’s young I’d love to see
smothered. I shouldn’t say that. I slice away layers
until only the pit remains. That indomitable pit.

Mind lulled into blue by the rocking
and engine’s drone, I watch gulls
circle a red fishing boat. Clumps
of amber seaweed bob by the wake
with the occasional log of wood.
Here humpbacks filter rich upswell
through baleen, seeking the sand lance
that slips into sand like sword into sheath
when threatened. Some whales surface
with chins scraped pink from the force
of their hurtle at what feeds them.
A lone male appears on the port side
with a deep divet between head and fin—
sliced by a passing ship. Early whalers hunted
these curious singers to extinction’s brink.
Today, shipping lanes criss-cross
their feeding grounds. Time’s up.
We turn back and follow the swath
of water-stars to the harbor, a distant
lighthouse we tack toward through fog.

As a diver, I’ve witnessed first-hand the changes occurring under the ocean’s surface—coral bleaching; lionfish invading the Caribbean and devouring local fish populations; reef lobsters tangled in nets. Each time I go diving, there’s a sense of urgency behind the wonder, fueled by the knowledge that this underwater world that restores me may disappear in my lifetime. Yet there are occasional signs of hope, like the increase in numbers of whales sighted this summer near Montauk. All life goes through cycles. But for the first time in our planet’s history, one species has the capacity to overwhelm the system. We could use the same technology that created this disaster to reduce our impact. It’s time to throw our abundant creativity behind finding better solutions for our energy needs and making sure the world’s poor has access to clean water. It’s time to stop seeing this planet as a resource to exploit and to start living in partnership with it. 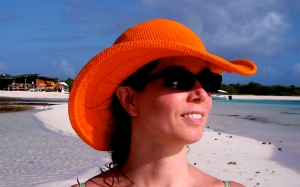 Marie-Elizabeth Mali lives in New York City. She is a co-curator of louderARTS: the Reading Series at Bar 13 Lounge and Page Meets Stage at the Bowery Poetry Club and is a poetry editor for TIFERET: A Journal of Spiritual Literature. Before receiving her MFA in poetry from Sarah Lawrence College, she practiced Traditional Chinese Medicine. Her work has appeared in Calyx, MiPOesias, and RATTLE, among others. www.memali.com

One thought on “TWO POEMS by Marie-Elizabeth Mali”