right now as we are in the moment
of destroying all life as we know it
beginning with the largest
& most terrifying animals—
wolves lions buffalo etc., lately I read
pollinators also—hummingbirds
bats & bees, traded for scary
architecture, stopsigns SUVs
roll thru, the shopping cart
that homeless guy pushes
allegorizing his relation to his
& all of our devourous consumption
to continuously shop for trash
in the outdoor aisles of this
littered with partly used extra
parking lot we now live in, this
sunblasted market we hired
drugged soldiers to ring,
a snarling dog defending
the pile of trash it eats
from, “traded” isn’t quite
the right word—amortized—
the selling off of the usable
parts of a whole, (pollinators,
forests, etc.), central arteries or
heart—for the survival or supposed
improvement of human goals, scary
architecture, steel reinforced
concrete, phones with the weather
on them, my phone doesn’t have that on it, I’m more
interested in communicating which seems rather
optimistic plus I guess I’d like whatever phone I’m using
to have the time on it—what time is it is what I am asking
is it already too late should I be writing an elegy rather than whatever this is 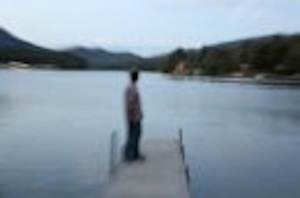 Jason Morris is a Vermont native. His poetry & essays have appeared in TRY!, Jacket, Mirage #4 Period(ical), Salt Hill, Forklift Ohio, The Tsatsawassans, eleven eleven, Quail Hunt, & elsewhere. His chapbook Spirits & Anchors was published by Auguste Press in 2010. He lives in San Francisco, where he edits Big Bell & works as a bartender..

One thought on “EVERYBODY COOL IT by Jason Morris”