Letter #1, to the Conscience Embodied

Dear Kathy, your body as oiled, a rig, an unidentified
sea turtle, botched and barely. As the I am, the slosh crab
apple, which finds itself in the sea. I’m there—the hazy
gurgle, a crude bunch. Somebody’s responsible. Some bodies
are thick, with ooze and spilling. Spit and muddle through
the debris. Fish, slick as your body. The cowards yellowing
emergency signs have no use for birds. The unidentified
black moans are slipshod, barely breathing. To rooster, to sea

horses. To drudge, drum up your arms. The personal worth
identifying. The weight of ovation. Your limbs affected empty
out the heart canal as waves move over the sea, an eye lid
covered in pelican beaks. Half-expecting necks. Some bodies,
clumped—pioneer sound. Breathe through your hot pores.
Breathe against the silent, particulate. Swell. 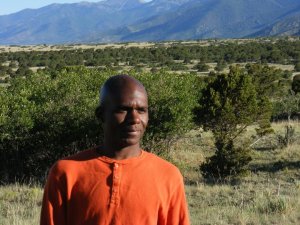 Richard Hamilton is an Alabama native currently living in Colorado.  A Cave Canem fellow, his work has been published in “A” Magazine, Xcp: cross cultural poetics, Reverie: Midwest African American Lit., and MATTER Journal.  In 2003, he traveled to Havana, Cuba to learn about the country’s movement toward renewable energy and plant-spirit medicine. In 2004, he joined a US-led delegation of activists/artists/educators organized by the San Francisco not-for-profit Global Exchange to attend the International Conference on Environment and Sustainability held in Havana. The symposium culminated in a trek across the northwest wing of Cuba led by activist and environmentalist Dr. John Francis, protesting the heinous effects of the United States Trade Embargo on the island. Richard is very interested in the entrenched politics of race and queer identity, which everywhere animate Cuba, and which are made ever more complex by a growing ‘black’ market system and a post-racial socialism. He is a former recipient of the Truman Capote fellowship in creative writing at the University of Alabama. While in Tuscaloosa, he founded and curated PUNCH, a poet reading series and workshop devoted to innovative writing and cultural studies. In 2007, he spent a year teaching poetry to inmates through the Alabama Prison Arts & Education Project at Auburn University. His online essay Poesis Behind Bars and chapbook Alabama Inmate Notes were published by the Drunken Boat in fall 2008. A recent graduate of NYU’s M.A. program in Arts Politics, he is currently at work on his first full-length collection of poetry about scales of blackness and community-art-life.

One thought on “LETTER #1, TO THE CONSCIENCE EMBODIED by Richard Hamilton”