Daughters of the deluge

Oil stains our blood
mothers
we are not clean,
our scales singe red
the chains are chemicals
they form rings
around our wrists,
we cry to the bones that gave us life
the bones disintegrate
the new ships are steel
the only bodies that drop-
our own
we swim in circles, singing ocean lullabies
blue
we cannot see the bones we once guarded
our prayers are pleas,
a protest for the fish that drown into our hands,
like the ancestors that birthed us

kiss the bones of black men
and women who jumped overboard,
screaming us into the waters-
sea creatures,
surviving unlike them

they flailed
and fought
all the way
down

until schools of angelfish
welcomed them
to the kingdom

with strong tails and scales
of brown chestnut hue 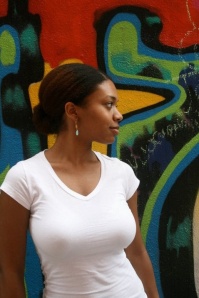 Nijla Baseema Mu’min is a writer, filmmaker, and photographer from the San Francisco Bay Area. She is a 2007 graduate of UC Berkeley where she earned a Bachelors degree in Mass Communications. She attended Howard University’s MFA Film Program. At UC Berkeley, she served as a Student Teacher in June Jordan’s Poetry for the People Program. She also participated in the VONA (Voices of Our Nations) Poetry workshop with poet Ruth Forman. She was a finalist for the PEN Emerging Voices Fellowship in 2009 and was the recipient of the Paul Robeson Award for Best Feature Screenplay that same year. Her poetry has appeared in the Berkeley Poetry Review and is forthcoming in Mythium: The Journal of Contemporary Literature. Her fiction is featured in the Girlchild Press Anthology, Woman’s Work: The Short Stories. She recently released a chapbook of poems entitled In the veins of fallen leaves. She is currently a graduate student in film directing at the California Institute of the Arts.