–-O remember
In your narrowing dark hours
That more things move
Than blood in the heart.
~Louise Bogan

Summer evening; the wind
a riffling finger
over the meadow’s tawny spine.

Starlings rise, resettle
as a woman might arrange her skirt.

And the stone wall: rock
lace tatted by the sun.

Granite, like the heart,
knows more
than blood can tell.

Anima mundi
–still and coursing, both–
in the heart, in the grasses’
feathery banners, in the feathers
of the birds, in the granite;

its gold eye closing
on this horizon, opening
on another.

All in the narrowing
darkness between them
–garden, ark, and living waters—
linked, linked.

How did I come to feel nothing
satisfies more than introspection?

As a child, I thought the moon
followed me like a spotlight—

Nothing’s challenged this perception;
the world’s a vivid distillate of self.

Look: this drop, this puddle, this sea
a mirror. This mirror mine.

The arc of my intention curves upon itself
like a nautilus shell; its direction–

ever inward-turning– my gesture,
that of my generation, that of my time.

Does the earth have a spirit or soul?  How could it not? I was moved to write “Anima Mundi” after Philip Glass’ 1993 composition of the same title.  Glass’ movements within that composition, “Garden,” “Ark” and “Living Waters” made a home in my poem, which speaks of the circularity of all the earth’s spirit systems.  It is a sad irony that the Gulf Coast disaster has added a new layer of relevance to this poem.  Circularity is also at work in “This Mirror Mine,” a poem about the inward-folding nature of consciousness at this time in history. 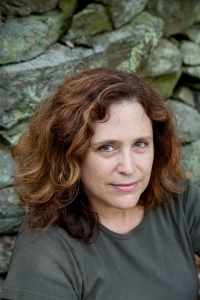 Leslie McGrath is a poet and essayist. Her work has appeared in Agni online, Alimentum, Beloit Poetry Journal, DIAGRAM, Poetry Ireland, and elsewhere. McGrath also conducts literary interviews, which have appeared in the Writer’s Chronicle and on public radio. Winner of the 2004 Pablo Neruda Prize for Poetry, her first collection of poetry, Opulent Hunger, Opulent Rage, won the Main Street Rag Poetry award and was published in 2009.  She edited (with Ravi Shankar) Radha Says, the posthumous poetry collection of Reetika Vazirani, published by Drunken Boat Press. She is the former managing editor of Drunken Boat online journal of the arts.