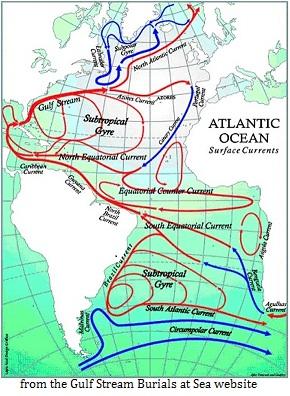 Which circles around the North Equatorial current

Which like a palm with many lines connects the Caribbean current

And the Equatorial Counter Current to the left, which swirls around in a circle

Guyana Current to the Caribbean Current until it reaches the Gulf Stream once again,

The Gulf Stream which passes through the Subtropical Gyre into the North Atlantic Current to the left,

And which is intersected by the Subpolar Gyre, at the top of the Earth.

Take my ashes and pour them into the Gulf Stream

That they may stream

Into the currents that connect all the oceans of the earth

And the shores of four continents.

Take the ashes of every oil guzzling person

What else will clean these waters but our bones

Saturated with oil they are

Stronger than any dispersant  —

To sweep the interconnected currents,

Clog the oil wherever it rises,

And return it to where it belongs:

the molten centermost core of the Earth.

Kristin Prevallet is a poet and performer who is the author of I, Afterlife: Essay in Mourning Time (Essay Press, 2007). This poem comes out of The Gulf Stream Mourning Action – a weekly meeting of people standing in meditation for one hour at different public shores in New York City. The East River may be far away from the BP oil catastrophe and not directly affected by it, but the fact is that all of the Earth’s waters are linked by a complex network of currents. And as oil continues to catalyze one tragedy after another (from the Gulf Wars to the Gulf Disaster) this weekly vigil has become an emotional reminder to all of us (and, hopefully, to a few passers-by) of the death and destruction (wars and environmental genocide) caused by our addiction to oil. “Please let’s rethink oil” is not a slogan – it’s a state of mind.