I picked my way nearer along the shocking rock shelf,
hoping the spray would rise up to meet me, myself.

Seagulls reared louder and closer than anything planned;
I looked out to see and forgot I could still see the land.

Lost in a foaming green crawl, I grew smaller than me;
shrunk in a tidepool, I heaved, and I wondered. The sea

grew like monuments for me. Each wave and its coloring shadow,
bereft, wild and laden with wrack, spoke for me and had no

need of my words any more. I was open and glad
at last, grateful like seaweed and glad, since I had

no place on the rocks but a voice, and the voice was the sea’s:
not my own. Just the sea’s.

I was angry at my mother
And the blood began to flow
Oil, oil, oil, oil—
No! No! No!

I was angry at my planet
And I smothered it with trash.
Oil, oil, oil, oil,
Burning without ash.

In her silences and shadow,
In the patience of her heart,
But I only found my ugliness,
And now the ruptures start.

We are all part of the same body and spirit—human, element, creature. So it is not only painful, but perplexing and dissonant, when we destroy the Gulf and therefore ourselves. How to reconcile or at least encompass such an indigestible paradox of self-destruction? Like an illness in the collective body, the devastation of the Gulf brings up into consciousness something that has been festering in us for far too long: the repressed imbalances of a defunct and perverse “lifestyle.” Time to notice the illness and to move finally through it, from pain to grief to healing change. 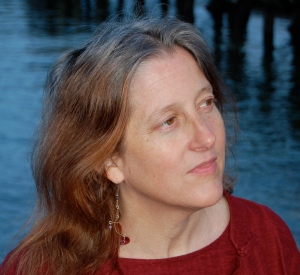 Annie Finch is the author or editor of fifteen books of poetry, translation, and criticism. Her books of poetry include Eve, Calendars, The Encyclopedia of Scotland, and Among the Goddesses: An Epic Libretto in Seven Dreams. Her poetry appears in numerous anthologies and textbooks and in journals including Agni, Fulcrum, Kenyon Review, Paris Review, Prairie Schooner, and Yale Review. Her other works include several books on poetics, most recently The Body of Poetry, An Exaltation of Forms, and A Poet’s Ear, and numerous music, art, theater, and opera collaborations. She directs the Stonecoast MFA program in creative writing at the University of Southern Maine.

One thought on “TWO POEMS by Annie Finch”