Floating across Lake Ponchartrain in a sleeping car
suspended above water, above bayous
that feed salt and storm surge,
I couldn’t feel the thinness of my skin
and how what I called my self
was already in crisis, how the city lights
I surged toward, an Atlantis on stilts,
slit the webbing between my fingers
and ushered in a cattle call of voices,
how the palm reader who couldn’t find
my lifelines pronounced me living
dead, how the gutter punk soliciting funds
for a vasectomy, the sky blue bandanna
around his throat shaded with grime,
would show proof, how swiftly I sank
to the bottom into the silt, the muck
where catfish lurk, their beards of hooks
and lures speaking wisdom,
how as a boy one of my jobs
was to sprinkle Old Bay Seasoning
into the eyestalks of blue crabs tossed
into a steaming pot, their mandibles
frothing with bubbles, how the orange
dust stunned and burned with the fever of land,
mica and gravel erasing softer visions
of descending blues and greens,
how when the lid was removed
they were scorched the color of red sand,
how I earned my place
at the temple of consumption and was given
a wood mallet and a sharp knife,
how the shells poured brine
onto newsprint covering the table,
dishes of melted butter spilling
onto baseball scores, how upended bushels
of crabs mocked our utensils,
how what I believed was the ocean floor
was actually the roof of an enormous lake
of oil, how corporations willing to season
and boil us alive would drill
into the ceiling of this lake
causing its shimmer to rise and spread,
how feathered or furred or scaled
we cannot escape mangroves slathered
black with tar, discs of oil washing ashore
the size of manhole covers
cartoon characters jump into and pull behind them
leaving us stranded by our imagination.

I grew up on the shores of the Chesapeake Bay, in a community called Scientist’s Cliffs that was founded by a group of paleontologists in 1935 who revered this complex ecosystem.  Living in this fragile space between land and water that was vulnerable to erosion and storms, I became familiar with its transient nature, its cycles of regeneration and flow.  My father had many friends in the crabbing business, and on spring and summer mornings I could hear the chortling engines of crab boats not far offshore.  New Orleans has also been a refuge for me, a city in which remarkable people and events have saved me from myself and have allowed me to descend into my own convoluted nature.  The devastating effects of this oil spill on ourselves and on all of the natural world compelled me to think about the psychological and emotional depths we all must navigate in order to compassionately respond to this crisis. 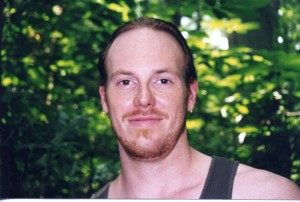 Brandon Lamson recently received his Ph.D. in Creative Writing and Literature from the University of Houston.  He has taught writing at various schools and universities, including an alternative school for inmates located on Riker’s Island.  His chapbook, Houston Gothic, co-authored with Chris Munde, was published in 2007, and his poems have appeared in Brilliant Corners, Pebble Lake Review, and Hunger Magazine.

One thought on “DESCENDING BLUES by Brandon Lamson”