Mistakes were opened like a scalpeled breast
as machines obeyed history
and crude surged from the Gulf’s cyan cellar.
Newspeak: spill.
The ceaseless nature of crying.

Trust was still unblemished, its wide mouth
sanctuaries and bandaged places
on the legs, sanguine seraph lit with explanation,
child who will be known as “brown pelican cresting.”
How forgiving can water be,
its rig-weary living rooms silent.

STATEMENT
As the mother of a young child, I feel particularly distressed to hear about the dire consequences faced by nesting animals in the wake of this disaster. I’m also reflecting on the irresistible pull that water has on little people. And it’s nearly impossible to keep them out of water that’s polluted. It’s a seemingly abstract concept that holds little sway in the presence of water itself, an endlessly fascinating substance. I want to protect as long as possible my daughter’s view that we live in a caring and just world and it’s painful to hold that for her when the evidence contradicts. I’m moved by her absolute trust, but she’s on the precipice of an alternate awareness: of human greed, lack of foresight and our unwillingness to do everything we can to protect all living creatures. I’m grateful to poetry for offering the possibility of making something of the incomprehensible. 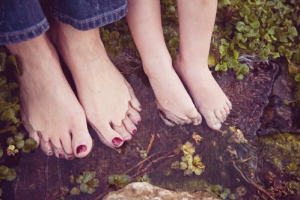 Lisanne Thompson’s work has appeared in nocturnes (re)view, 26, Xantippe and Five Fingers Review. She received her MFA from St. Mary’s College and lives in Oakland, California with her daughter Nina.

2 thoughts on “HATCHLING by Lisanne Thompson”